This is dedicated to my grandmother, Mama Beatrice Tawiah Addo, who passed into the ancestor realm on December 31st, 2017.

‘On the way to another funeral’, I thought as we drove over the scattered stones leading away from my father’s house. If I knew then what I would find out later, that it was not just another funeral, I would have crunched the thought until it was the size of a pea and flicked it into the deepest ends of the earth. But let’s continue; we will get there. We pulled up to mama’s house to pick up my aunt, Sisi Mother. My dad and Kwame got out the car to get something from the house.

I sat in the car with Miss, my dad’s wife. I looked out the window and saw, for the first time, a family of brown dogs. There were four of them roaming in an unfinished building; two adult males, an adult female and a small puppy. The puppy went under the mother’s perched form and began to suck her breasts. One of the males lovingly licked the puppy’s ear. #Swoon. The family then continued towards the back of the building, hopping up on a raised slab that began a higher level in the building. They disappeared around the bend. All but the puppy.

The puppy ran around the opposite way, looking for an alternate route up. He came back around, again facing the raised level in the house. One of the adult males returned looking for the puppy. I watched in fascination, wondering how they would solve this conundrum. Miss asked me to go to mama’s house and ask Mother if she could bring a hymn book to the car. “Mepa wo ky3w, wo se?/ Please, what did you say?”, I asked her, trying to buy more time to watch the dogs. She repeated.

I got out the car slowly, watching what seemed like the climax in a real-life film. The father briefly looked at me staring at them. By the time I got to my grandmother’s house, I heard the puppy crying. I used to feel like that puppy sometimes, unsure of how to leap into the next level of my life. Maybe that’s why I was so interested to see how the canines would jump to the higher phase.

I entered the gate to mama’s house. Her three dogs stared blankly at me in ‘good morning’ and the goats looked past me, unbothered. I peeped my Uncle Charles sitting on the porch. I heard Sisi Mother, my brother Kwame and dad talking inside. “Maakye o/ Good morning o”, I greeted Uncle Charles. “Yaa oba/ I receive it, my child”, he replied. I motioned towards the door. “Me be tumi a k) inside?/ Is it okay if I go inside?”, I asked. “Oh, wo be tumi a k)/ Sure, you can go inside/ Girl, stop playing”, he said. I walked into the hallway and met my brother, who was standing in the doorway of Sisi Mother’s room.

“Yaakye anaa?/ Did we take long or?”, my dad asked when he saw my face. They were taking ice blocks wrapped in plastic and malt drinks to the car to contribute to the funeral. “Daabi/No”, I responded. I said to Mother “Mepa ky3w, Miss se fa hymn book na bre no/ please, Miss said to bring her the hymn book”. “Se wo w) hymn book a…/ If you have a hymn book”, my dad added. I realized my wording must have been impolite.

When we got to Asikabew, we didn’t go inside the compound immediately. The guys took the drinks inside and came back. A bunch of kids stood outside chilling. “Let’s go the gravesite, that’s where everyone is”, my dad said. We bypassed the compound, going around the right side of it and following a long, curved trail made in the grass, leading to a forest like part of the village. We met a crowd of people standing around two graves singing songs. A pastor stood in the middle. One of the graves read “In Memory of Eric Adjei”. I started recording but cut the video off when I heard a woman cry out in anguish. I looked. It was Auntie Maggie.

She held onto a tree for support. I saw some other family members that I recognized. Across the crowd, I peered and saw Uncle Seth, dressed to the nine as always. He wore a red and yellow cloth draped around his bare chest in traditional fashion. Finally, the program was over. I noticed the pastor from the methodist church greeting my father. Then, he said to me “ete den?/ how are you?”. “Me ho ye/ I’m fine”, I replied. “Wo te Twi?/ Do you understand Twi?”, he asked. “Yiw/ Yes”, I said. “Saa, wo hu? Se me nim se wo te Twi ankaa ye dii nk)mo. Me nim se wo firi aburokyire ni bae nti wo ntumi nka/ Oh forreal, if I knew you hear Twi we could have talked. I figured since you came from abroad you can’t speak Twi”, is what he said to me. “Yoo/ Oh, I see”, I responded. “Me gyae school ntem nti me nte brofo papa/ I stopped going to school early so I don’t hear English very well”, he continued. “Yoo/ Ok”, I said again. I felt insecure with my Twi speaking so I didn’t press further conversation.

We went back into the compound and a bunch of elders, led by Uncle Seth, gathered nsafufu/ palm wine, akpeteshie and bitters to pour libations. The chief asked for volunteers to help pour the spirits. An Ewe man and another guy stood. One of my cousins motioned for my other family member to volunteer, warning him “Ayigbef) be tak3 ova/ The Ewes will take over”. My family member was unbothered. I chuckled at the interaction #thattribalismthough. Uncle Seth began to spill the nsafufu, which was carried in a black gourd, on the ground. “Oh, Twede Nyampon, Assase Yaa nsa, …”, he said, calling out the names of the ancestors, beckoning for them to come enjoy the drink of their choice. He sobbed when mentioning the name of the new ancestor whose funeral anniversary we attended, but he finished to the end. In Ghanaian tradition, no one is left behind, no matter what age. Even in death, family members are honored and remembered.

After, the men holding the drinks went around to the guests offering everyone spirits. My auntie Ajele put white powder on the arms of our deceased family member’s ex wife to free her from the marriage so she can marry again. Then, a group of elders, including Sisi Mother, went into Auntie Maggie’s room to discuss arrangements for the now ex-wife to move off the land.

A family member sitting next to me, Ebo, asked if I wanted to go to the distillery and see where they make the palm wine and akpeteshie. I asked Kwame if he would join us; he said yes. So we left the funeral and walked upwards. Ebo called out the name of people when we passed their houses but no avail. “Everyone must be at the funeral”, I said.

When we got to the distillery, we passed the akpeteshie being made in big barrels to sit under a shaded bench. Ebo made a very loud, strange animal noise. “This is how we call each other”, he said. No response. He did it about four more times. Still no avail. “) k) efum/ He went to the farm”, he said. 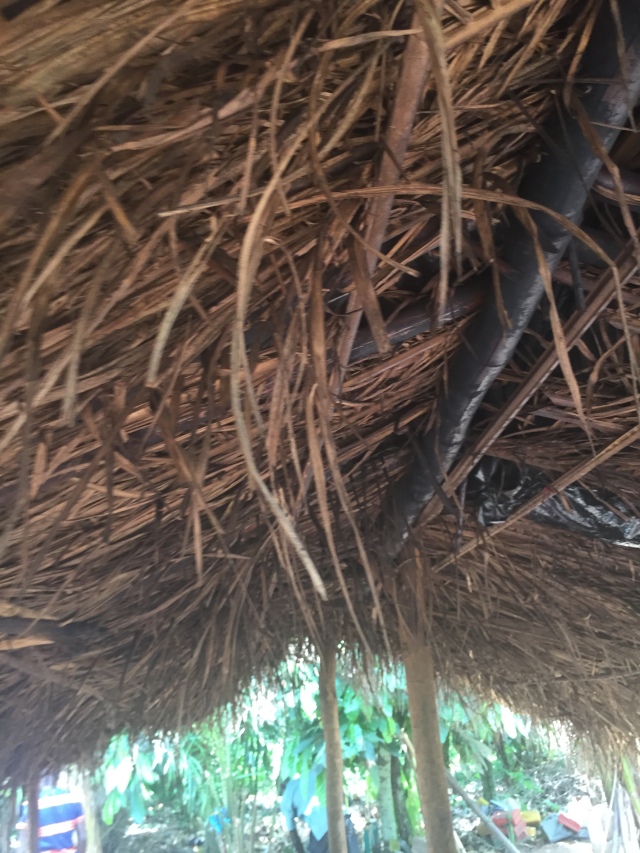 He left and came back with a dingy gasoline tank full of fresh palm wine. He poured some into a dirt stained cup, sifting the impurities out of the palm wine, which looked like wet, white flour. Then, he drank the palm wine, bugs swirling around it and all. I told him I didn’t want any but I would take pictures for the experience.

On the way back we saw an older man that I remembered seeing earlier that day. I asked if I could take a picture of him. He said “Feel Free!” and smiled brightly. It seemed everyone in Asikabew was family or behaved so. It was beautiful to know the whole town gathered to honor our family member and ancestor. It was not just another funeral, I realized during the bumpy ride home. It was a celebration, a reunion, and a sacred ritual. I am not sure exactly where you go when death comes to the door, but I do know that energy never dies. It only transforms. When we were at the gravesite a flying insect came and watched the program. I felt like it was the new ancestor, watching over us. My grandmother speaks to me through nature, animals, the passing wind… I could go on. In Ghana funerals are arguably the most important event. The tradition is proof of its strong spiritual foundation and my privilege in belonging to the beautiful Akuapem tribe is not something I take for granted.